In The Name of History

Many times, when you live and were raised in a historic community like my home in Newport, Rhode Island, you take for granted the significant sites and structures in the place you call home. My family has lived on Vernon Avenue for four generations. We have played baseball and tennis at Vernon Park next to our home. And up the street is the historic Vernon Family estate, “Elmhyrst” designed by famed Russell Warren, the leader of Greek Revival architecture in early America. But as I was surrounded by everything Vernon, it would later become clear to me that the Vernon name, which has been synonymous in Newport with our founding settlers and early commerce and political leadership, is also tied to the African Slave Trade.

Samuel and William Vernon were born in Newport in 1711 and 1719 respectively to a prosperous merchant family that traces back to the founding settlers. Both would enter the maritime trade and become Newport’s most prominent merchants of the 18th century. William would become a founding member of the Newport Artillery Company (1741), Redwood Library (1747) and early benefactor of the College of New Jersey that would become Princeton University. During the American Revolution, Samuel was one of the ringleaders of the Stamp Act Riot (1765) and William was appointed by the Continental Congress as first President of the Eastern Naval Board, the forerunner to the Secretary of the Navy position. 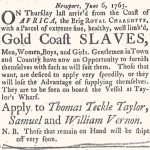 Throughout the early and middle 18th century, Samuel and William Vernon would amass a great fortune by purchasing slaves in Africa with rum from Newport distilleries, and selling enslaved Africans in the West Indies. Later, the Vernons’ are known as the first Newport merchants to sell African slaves directly to the southern colonies, particularly Charleston, South Carolina. One of the most famous American slave stories today is when Priscilla, a 10-year old African child from Sierra Leone is taken to Charleston in 1756 on the slave ship “Hare” owned by the Vernon’s of Newport. Other slave ships owned by the Vernons included the Othello, Royal Charlotte, Little Sally, Adventures, and Ascension.

A quote mostly attributed to Winston Churchill states, “history is mostly written by the victors.” From my life experiences living amongst some of the most important historic structures and places in early America, I believe history is written both by the victors and most prominent citizens, but understood by also hearing the narratives of the conquered, oppressed, and common citizens such as the enslaved African men, women and children, whose work and toil would build much of the New World. Through and by knowing more about them, we have an opportunity to learn the entire history of our community and country. I’m passionate about African American history because it gives me a better appreciation of the true foundations of this great country, its struggle to form and live up to a greater ideal, a struggle that we continue today.