For better or worse, far too many historical interpretations of the European Trans-Atlantic Slave Trade and the enslavement of Africans in the Western Hemisphere have overshadowed the narratives of the Africans themselves, rendering their past lives and accomplishments nearly invisible to the present-day audience. Award-winning African heritage author, Ralph Ellison vividly depicted this dilemma in his epic novel, Invisible Man highlighting the profoundly ironic condition of African heritage people in America then and even to this day stating, “I am an invisible man. I am a man of substance, of flesh and bone, fiber and liquids, and I might even be said to possess a mind. I am invisible, understand me, simply because people refuse to see me.”

Fortunately, beyond the endless interpretations of the slave institution with little recognition of the African experience in the early Americas, there are reams of primary and secondary documents that provide detailed accounts that present African men and women as complex and captivating human beings. 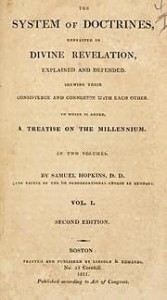 One such account is tied to the important works of Reverend Samuel Hopkins, minister at the First Congregational Church in Newport, Rhode Island. Hopkins is recognized as one of the first clergy to actively denounce African slavery and would become America’s first Abolitionist. A prolific writer, in 1793 his A System of Doctrines Contained in Divine Revelation, Explained and Defended is recognized as an important work of early American religious doctrine. Traditionally, publishing and distribution costs for books were largely covered through subscribers. The who’s who of Colonial America listed as subscribers to Hopkins’ work is impressive on its own, but it is the list of seventeen Free Black Subscribers, nearly all of whom are living in the reverend’s own community of Newport, that stands out. These African men and women, who had all been born in Africa, endured the transatlantic passage and years of human bondage, became part of one of the exceptional free African communities in early America. Individually and collectively, these Africans made a lasting mark in the early history of black business, arts, culture, religion, education and civic advancement.

Beyond slavery, the collective and individual deeds of these free Africans would not only improve the conditions of their own world, but set the stage for a better world for the future people of who would evolve into African Americans. And what were their historic deeds? Bristol Yamma would join Duchess Quamino’s husband John Quamino as the first Africans to enter college at what is today Princeton University, prior to the American Revolution. Prince Amy, Lincoln Elliot, Bristol Yamma, Zingo Stevens and Newport Gardner would become founders and early members of the Free African Union Society in Newport in 1780. The society is recognized as the first African benevolent society in America. Newport Gardner aka Nkrumah Mireku was the first published African musician in America and became a founding member and teacher in 1808 of the first free African school. Mrs. Obour Tanner would become a founder of the Free African Female Benevolent Society in 1809, the first African society of its kind in America. In her earlier life, Tanner was a personal friend and correspondent with Phyllis Wheatley, America’s first African woman published poet. Duchess Quamino would be known as the “Pasty Queen” of Colonial Rhode Island and her lifelong devotion to her church and belief in God would cause the Revered William Ellery Channing, one of the early founders of the Unitarian Church, to call her a woman of “exemplary piety.” Zingo Stevens would become a master stone mason and his work carving headstones for his fellow Africans is recognized as an early example of African artwork in America.

The exceptional lives and contributions of these seventeen men and women is only a brief example of the larger and numerous stories of African contributions in early America. While the recognition and understanding of the slave trade as a profound contributing institution to the building of the Americas is important, so are the factual stories that present Africans as more than chattel property. For it is through their blood, sweat and tears, that our great nation was built. To know more about them, is to know more about America.

As my Newport grandmother would often remind me, “slavery is how we got here, but it tells you little as to who we are as a people.”