Still on the Plantation

The years leading up to and through WWI, America would see the first Great Migration of African American families who would move from the rural south to urban cities in the north. During that time nearly 2 million men, women and children would leave the plantations and farms of the rural south to find better work and living opportunities in urban cities like New York, Philadelphia, Boston, Cleveland and Chicago. 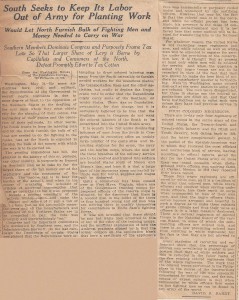 The article comes from the Washington Bureau of the Providence (RI) Journal, 1918.

As Americans hotly debated if the United States should enter the war in Europe, white plantation and railroad owners in the south, fearing the loss of their labor-force, would press the President and Congress not to recruit African American (Negro) troops that would greatly deplete workers on cotton plantations and porters on railroads.  Despite the gross self-interest of southern white political and business leaders, over 350,000 African American men would eventually serve in the United States Armed Forces during WWI.