In all the years that I have worked researching and interpreting slave cemeteries, the most interesting and baffling discovery I have come across is the matching burial markers in Newport, RI and Dorchester, MA of a young slave girl named Ann. She died in June 1743 at two years of age. Her mother’s name was Mimbo and they were both slaves in the Robert Oliver household in Dorchester.
Oliver was a wealthy planter from Antigua who settled in Dorchester around 1737. He brought with him several African servants. While there is little historical evidence of Oliver having been active in Newport, there were numerous Newport merchants connected to Antigua, particularly the Redwood family who owned a large plantation in Antigua named “Cassandra Garden.” 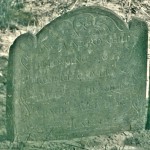 Since Ann dies at age two in 1743, it is mostly likely she was born in New England. While I know her mother’s name, I don’t know if she was born in New England or if she, like many of the New England slaves, came from the Gold or Windward Coasts of West Africa, directly or via the Caribbean. The Akan people of the Gold Coast (Ghana) frequently named their children after the day of the week they were born and the order in which they were born. Mimbo may be the day name for girls born on Saturday. Mimbo is also sometimes listed as the African name for Palm Wine.
Historical records does not tell us much more about why there might be two identical markers of young Ann, but these ancient markers clearly present the historical fact that persons of African heritage were very much a part of the earliest histories of New England and America. And the stories of early American settlement would be incomplete if we did not include the accounts of African men, women and little girls like Ann. So much more to discover…